Over the past month I’ve been playing around with the new In-Memory OLTP (code name: “Hekaton”) features within SQL Server 2014 CTP2. My organization is all about low latency applications, and this is one feature of SQL Server that I need to get familiar with ASAP.

To do this, I started my own little project that takes an existing database and converts parts of it into in-memory tables.  Once that step is complete, I could work on rewriting the TSQL code.

It might seem fairly simple, but with every new feature of SQL Server there are usually limitations. And one of the first ones I noticed was the use of an IDENTITY column. They are prohibited in Hekaton tables which means I had to find an alternative. This is where the new SEQUENCE object comes into play.

The CREATE SEQUENCE command allows you to create a user-defined numerical value that can be ascending or descending. This gives it much more flexibility than an IDENTITY column, and it’s fully supported for use within an in-memory table.

Looking at the example below, we have a table with an IDENTITY value used for the OrderID column.

And we have a typical insert statement to insert a new order. Notice the IDENTITY column is not specified because it’s value is automatically generated during at runtime.

So how would this need to be rewritten to be turned into an in-memory table?  First we just need to create the table without the IDENTITY value.

Then we’ll need to create a SEQUENCE that produces the same order of values as the IDENTITY. In our example, it starts and 1 and increments by one.

The insert statement will look a little different, because we’ll need to call the NEXT VALUE FOR function for the SEQUENCE we just created.

You could also generate the next sequence number ahead of time and then insert the value in a later statement.

So far, I think Microsoft has done a great job with the new Hekaton feature. They are definitely marketing it as a feature to implement with little to no changes in code, but I think that really depends on the existing code.  This is very basic rewrite, but one that only took a few minutes to implement.

Check out Books Online for more detailed information about both Hekaton and Sequence Numbers.

© 2019 Patrick Keisler
Sr. Premier Field Engineer at Microsoft. Comments, tweets, and posts are my own and do not reflect the views of my employer. 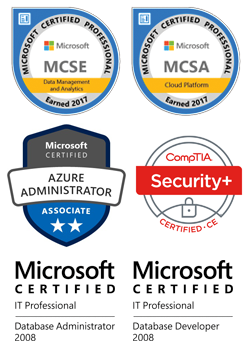